Larry Dunn got his start as a performer at the tender age of 11. “I met Hillard Wilson,” said Dunn. “He was 13 and together we had one the finest bands. We were children, but we rehearsed and we learned.” That first band was mostly instrumental. “We were doing stuff like ‘Grazing in the Grass’ by Hue Masekela and music by Junior Walker, Jimmy Smith, that kinda stuff.” 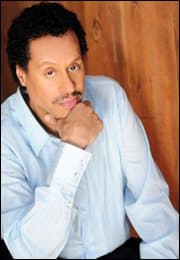 There was a hall where Dunn and his band mates used to play and one night there was a three member band sitting on stools doing a Curtis Mayfield song, “In the Shadows” and one of those singers was Phillip Bailey. The other two members were Karl Karlen, and Winston Ford.

Dunn noted, “We were just amazed, so we snatched them with us and created a band that was just amazing. We played all over Denver. By the time I was 15 years-old, my little Italian mom let me play nightclubs seven nights a week. Back in those days, there was only one pre-requisite to playing the band…you had to play your butt off. We did care if you were black or white, skinny or ugly, you had to play.”

When asked how he felt about performers today, he wasn’t so impressed with today’s artists. “Nowadays, you go to a performance and it’s two guys with turn tables,” said Dunn.

“I love what Steve Harvey was talkin’ about, ‘Ya, know. The Four Tops man. They had one microphone and they would do their steps and come around that mic and sing their butts off and now you got 27 rappers on stage, they all got a mic and none of them are singing.’”

Dunn and his crew ended up creating a band called Friends and Love. “It was all these ‘brothers’, ya know. We had two white guys from Philly. One was Stephen Sykes and Steve was en excellent engineer. I did a remake of ‘Reasons’ with this group from Chattanooga, Tennessee and Steve engineered it for me. He’s a great guitar player and he was that “Play that funky music white boy” guy from Philly! He brought with him, Greg and he was a saxophone guy like Michael Brecker.”

Between the age of 15 and 16 years old, Dunn and his band opened a show at Hilton Hotel for Maurice White with the first Earth, Wind, & Fire. The band was with the guys from Chicago. “They had two albums with Warner Bros, so we knew their stuff. So, we opened the show for them. It was an early show and they came to check us out.

Shortly after that show, Earth, Wind, & Fire broke up. All those guys walked out on Maurice and Verdine White. It was just Maurice and Verdine in a hotel in L.A. and they had to regroup. Phillip Bailey moved to L.A. and he eventually saw me play a show, opening for the group WAR. Phillip got on the phone with Maurice and he said, “I think we got THE guy” and the rest, as they say, the rest is history.

In 2000, Larry Dunn was inducted into the Rock & Roll Hall of Fame along side other members of the Earth, Wind, & Fire. Dunn’s contribution to the band helped them achieve immortal status, selling over 100 million albums worldwide, with 13 total Nominations and win 6 Grammy’s, four American Music Awards, and earn 32 Gold and Multi-Platinum records and albums.

On November 28, 2017, Dunn is in Denver, Colorado is being honored along with other Jazz luminaries at the Paramount Theatre for the Colorado Music Hall of Fame. Other honorees included band members Phillip Bailey and Andrew Woolfolk for their contributions to EWF as some of the best Artists to come out of Denver, CO. All inductees were worthy for this highest honor for this year’s Jazz Masters & Beyond at the 6th Annual Colorado Music Hall of Fame.

See a special live performance of Larry Dunn’s Anthology of Earth, Wind, & Fire at The Rose on Sunday, December 3. Tickets are available at https://wheremusicmeetsthesoul.com/events/larry-dunn-pasadena/