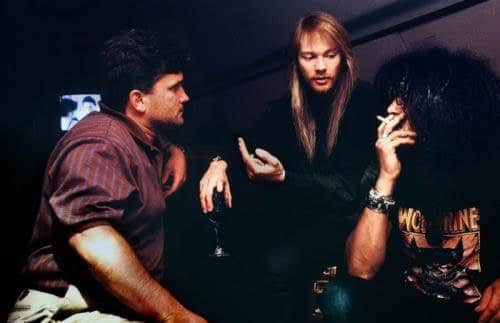 Rock legends Guns N’ Roses have been in the news these past few weeks. With their show – stealing set at Coachella, and their recent pop up performance at The Troubadour, Guns N’ Roses prove they are as popular as ever before. Former manager of the band, Doug Goldstein, recounts a hair-raising experience south of the border. while on tour with G N’ R.

So the three of us (Axl, Slash and I) used to have numerous meetings on the plane. I managed Guns N’ Roses for 17 years. One of the classic stories I’d like to share is our trip to Bogota, Colombia back in 1991.

We were to play two nights (Friday and Saturday) in Bogota. After playing a Thursday show in Caracas Venezuela, we flew into Bogota only to find out there had been a coupe attempt in Caracas, which closed the airport, meaning our gear was being held back.

The promoters tried to talk me into giving back half the money and just playing the Saturday show. I blatantly told them “No way”, that we would play on the Saturday and Sunday!! The promoters opted for one show on Saturday. We played the show and there were at least 30,000 fans trying to gain access into the building. Cops on horseback were deployed and they were hitting fans over the head!

The band started playing “November Rain”, and the rain started pouring down in the roofless stadium. The fans who couldn’t get in ravaged the streets looting the shops in town!

At about 7am, I heard a knock on my door. I got up and there was a soldier who stuck a machine gun in my chest. I read the note (which was written in Spanish), and it said I have a mandatory meeting with the mayor at 3pm. I told him I would let Mr. Goldstein know as soon as he got back!

I called my U.S. Embassy security guy and asked him to come to my room. I asked him what the letter meant, and he told me what I had assumed. There was no meeting — they were going to kidnap me and hold me until we returned half the money. We woke up the security guys and had them get the entourage together and hauled ass to the airport!

Whew!!! Escaped just in time! One of thousands of stories that come from managing “The Most Dangerous Band in Music History”!!!!