While reaching “supergroup” status in the public’s eyes, the Dramatics have been one of the most prolific, consistently entertaining groups of the last half century. Another of the great non-Motown Detroit groups formed in the late 60s, the Dramatics went through significant personnel changes over their early years. They ultimately found a hit on Stax/Volt Records with “Whatcha See Is Whatcha Get,” a latin-tinged cut lyrically based on a comic phrase popularized by Flip Wilson. It was an instant hit on both the pop and soul charts, and began a string of great cuts for the group. The follow-ups hits “In The Rain” and “Toast to the Fool” were even better, and have remained in active play on many stations ever since.

While the group has had various compositions, once L.J. Reynolds in joined in 1973, the core of the group was set. With Reynolds’ gruff baritone and Ron Banks’ soaring falsetto, Willie Ford’s bass sound, the smooth Lenny Mayes and singer and group choreographer Larry Demps, a unique group harmony and stage show was created and that kept The Dramatics at the top of the charts for more than a decade.

In 2006, local Detroit developer Herb Strather honored the Dramatics (along with Freda Payne, the Four Tops and others), with a street named after the group in one of the newest neighborhoods being built in the city. 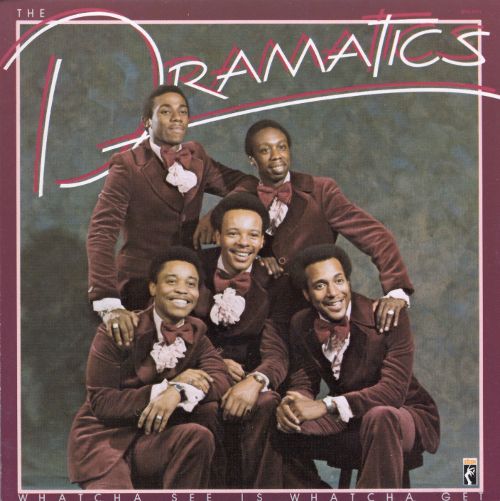 The Dramatics were honored for their careers when they received the “Lifetime Achievement Award” atthe 2008 SoulTracks Readers’ Choice Awards. All of the current members came to the awards as well as the mother of deceased member Lenny Mayes.

In the mid-seventies on Soul radio, Hits like “Be My Girl,” “Shake It Well” and “Fell For You” carried the group into the early 80s. They split up in 1982 as Reynolds and Banks both embarked on solo careers. The Dramatics reunited in 1986 with Somewhere In Time and its great crossover hit, “One Love Ago.” They received national attention for their professionalism in 2001 when they performed a save for “Fly Jock” Tom Joyner, singing two sets during his show’s appearance in Detroit on less than 12 hours notice after a cancellation by DeBarge.

In 2003, the group, then consisting of Reynolds, Banks, Winzell Kelly, Willie Ford and Lenny Mayes, released Greatest Hits Live, a terrific peek at a 2001 Dramatics performance that showed the group still in fine form and a testament to the longevity of this great soul act. Sadly, group member Lenny Mayes died on November 7, 2004, after a long illness.

Party with The Dramatics at The Rose in Pasadena on New Years Eve (Sunday, December 31). Tickets are available now at https://wheremusicmeetsthesoul.com/events/the-dramatics-pasadena/