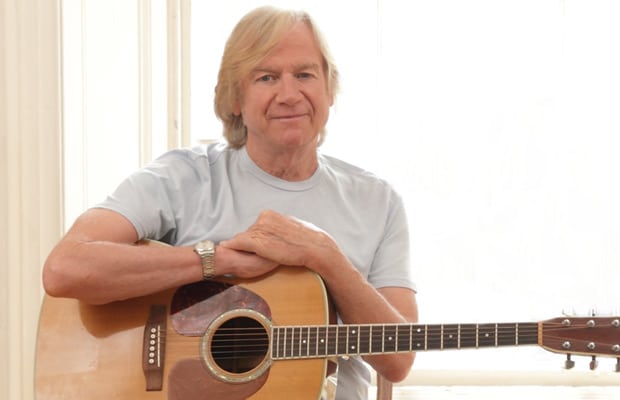 Justin Hayward’s impact on the music industry is undeniable. From his 18 platinum and gold awarded band “The Moody Blues”, whose album sales are estimated to be near 70 million, to his impressive solo career, Hayward has left his mark on the Rock N’ Roll music scene for decades to come. He is now set to bring his career spanning catalog of hits to 2 of our venues, The Rose in Pasadena on June 11th, and The Canyon Club on June 12th.His smash hits including “This Morning”, and “Nights in White Satin” helped form Hayward into a household name and became the soundtrack to millions of adoring fans’ lives as they grew up with his music.

From time to time, Hayward can still be found playing gigs with two of his fellow Moody Blues members. “The three of us that are still playing together, we’re so lucky to have been there at the right time and together and to have had success, that’s something that the three of us really treasure, it’s hard to let go of.”

Hayward’s upcoming solo shows are where he can really get back to the way his songs were intended to be heard, using the same acoustic guitars he played while recording the records.

“I enjoy this solo touring as well because it brings back the essence of the songs and it’s the way that I originally wrote them, it’s how they would have sounded in my own home,” Hayward said. “I get to bring my acoustic guitars out from home, the ones that played on the records, so that’s nice too. It gives me a chance to do things that we’ve never done with the Moodys. It gives a different look to the set list and what to play. That’s always interesting, I get to do ‘Forever Autumn’ which was a hit for me as well. I enjoy every moment, it’s very precious.”

While reflecting back on his impressive career, Hayward notes “Things are always much more interesting when you look back at them. I think the most enjoyable time for me was the mid 1980’s. I wasn’t very much aware of what was happening in the 60’s, I suppose because I was so young. But in the 80’s, to have success with ‘Wildest Dreams’ and ‘I Know You’re Out There Somewhere,’ it was a real joy to have that opportunity, it’s like a second chance, and to be recognized in the street for the first time, people never knew my name but they’d say, ‘Hey aren’t you the Moody Blues guy?’ because of the videos and stuff like that. It was a wonderful time.”

Expanding on his decade spanning catalog of music, Hayward recently debuted a new song, ‘The Wind of Heaven.’ The song was inspired when David Minasian, a filmmaker who was working on a live DVD with Hayward, was working on a film about a vet returning from Afghanistan. Hayward felt such a deep emotional connection with the story line of the film, that he wrote the song.

The deep emotional connection Hayward felt really hit home with the audience as he performed the song, prompting a veteran in the crowd to stand up and thank Hayward for his heartfelt song. “On behalf of all us veterans in the audience, we want to thank you for playing this song tonight.”

Come experience a once-in-a-lifetime performance experience with Hayward, where you too can live in “Forever Autumn,” even if it’s just for one night.