Wilson Phillips are best known for their music including three No. 1 hit singles from the early ’90s  including, “Hold On”, “Release Me”, and “You’re In Love.” “Hold On” went on to receive five Grammy Nominations and two American Music Awards nominations, but did you know Wilson Phillips have a long history of music that runs in their families?

Most people know that Carnie Wilson, Wendy Wilson, and Chynna Phillips make up Wilson Phillips, but what are their roots in music?

Let’s start with Carnie Wilson. Carnie Wilson was a guest star on E!’s Entertainment Tonight, she’s been on CMT’s Gone Country, made several appearances on VH1 on various shows, hosted The Newlywed Game, and she starred in a reality TV show on TV Guide Network about the rebirth of her band Wilson Phillips. You might have noticed her on Celebrity Fit Club and seen her on The New Celebrity Apprentice. Not only that, Carnie is also the daughter of none-other than Brian Wilson of the Beach Boys and of course, she is Wendy Wilson’s older sister.

Wendy Wilson co-founded Wilson Phillips with Carnie and childhood friend Chynna Phillips. This goes without saying that Wendy is also the daughter to Brian Wilson. While Carnie and Wendy’s father has periodically come and gone from their lives, he still has had an influence on their careers in music. Wendy is married to Engineer/Producer Daniel Knutson. Together they have four sons. Wendy also became one of the first celebrities to appear on ABC’s Supernanny.

Singer Songwriter and Actress, Chynna Phillips, the third member of Wilson Phillips is daughter to Michelle Phillips of the Mama’s and the 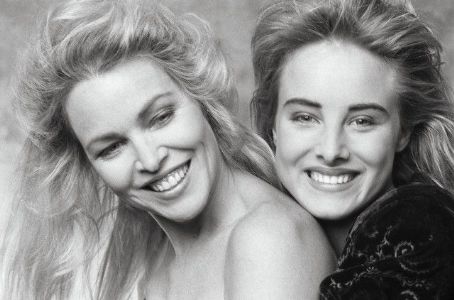 Papa’s. Chynna’s career started out in film and you might remember her as Mia in the movie Some Kind of Wonderful. She played as Hardy’s girlfriend, whom he cheats with Amanda…yeah, that girl. Along with her film and music career, Chynna is married William Baldwin. In 2011, Chynna also competed in Dancing with the Stars and she played a cameo in the blockbuster movie, Bridesmaids. Chynna is returning to television on the upcoming comedy, Youth Group, featuring her husband and William’s brother, Stephen Baldwin.

Together, they released albums in 1990, 1992, and released Christmas album in 1993. Their 1990 debut album sold over 10 million copies and “Hold On” won them a Top 100 Billboard award for Single of the Year, but experienced a sharp decline in record sales on their sophomore album, Shadows and Light. The band went on hiatus from 1993 to 2003 due to problems within the family and became estranged from their father, Brian. In 2004, the band reunited and released California and released the album Dedicated in 2012.

To purchase tickets, go to www.wheremusicmeetsthesoul.com